Wednesday at the stroke of midnight, the 2021 legislative session came to a close after five months of hearings, committee meetings, and sometimes contentious floor debates. As with all legislative sessions, good legislation has passed alongside bills that present more problems than they solve.

Unfortunately, the Majority has already called us into Special Session next week to discuss and vote on the budget implementer and the legalization of the adult use of recreational marijuana. But before that happens, I would like to share some of the good and bad bills passed as well as some information about the state budget.

HB 6517 - Creates the state Office of Dyslexia and Reading Disabilities to formalize, enable and enforce a robust program of early detection and proven educational supports for students with dyslexia.

HB 6417 - Requires comprehensive background checks for camp counselors over the age of eighteen in order to protect our children from potential harm. This bill was amended to include coaches of youth sports as well.

HB 5597- An Act Concerning Opioids establishes a pilot program to allow for five new peer navigators that will help facilitate engagement between providers of treatment services, improve treatment retention rates, and increase the capacity of the community to support those in recovery from opioid addiction.

SB 1019 - This bill allows for the automatic erasure of certain offenses from criminal records, including hate crimes. We had good amendments to this bill to remove certain heinous crimes from automatic erasure, but our fair and reasonable amendments were rejected.

SB 972 - AAC The Cost of Telecommunications Services in Correctional Facilities gives incarcerated persons free phone calls, meaning that hypothetically, a murderer would be able to call a loved one from prison at the expense of a family member of a loved one whose life the prisoner took. I supported an amendment that would set the phone call rate to equal the actual cost of each call to the correctional facility and state. The amendment failed along party lines.

SB 2 - Provides certain services to school-aged children without parental consent. I supported an amendment that would require the state's Commissioner of Education to create an education plan for all the children who will not be permitted to enter public and private K-12 school facilities now that the state has eliminated the religious exemption from the immunization requirement, which failed.

HB 6389 - This bill, now law, permits insurance companies to withhold the details of services provided to minor children from their parents/legal guardians, even if the parents/guardians are the policy holders. For example, a minor could seek treatment for STD or physical abuse, and while the parents would be billed for these services (if not fully covered), they would have no way of knowing what treatments were provided to their child.

HB 6423 - AAC Immunizations, which was quickly and quietly signed into law by Governor Lamont shortly after its passage in the House and Senate, eliminates the religious exemption from the state's immunization requirement for K-12 students in both public AND private schools. The state constitution mandates that Connecticut provide a public education to all students, and it will be interesting to see how majority Democrats resolve this issue.

HB 6687 - AAC Medical Assistance for Children & Adults Without Health Care Coverage would give undocumented immigrants access to free health care. A Republican amendment would have instead use these funds to assist veterans.

SB 908 - This bill reverses the 2019 US Supreme Court JANUS ruling, which protected workers from paying union dues when they do not wish to join one. This bill, which is now law in Connecticut, gives unions unfettered access to public employees within the workplace, blurring the lines between their work on behalf of the taxpayers, and union activities.

HB 6688 - AAC A Highway Use Fee would create a mileage tax on trucks in Connecticut. While this tax would not be charged directly to residents, the extra cost to trucking companies, and by extension, Connecticut businesses, would ultimately be passed onto consumers. You can view my comments on this legislation below. 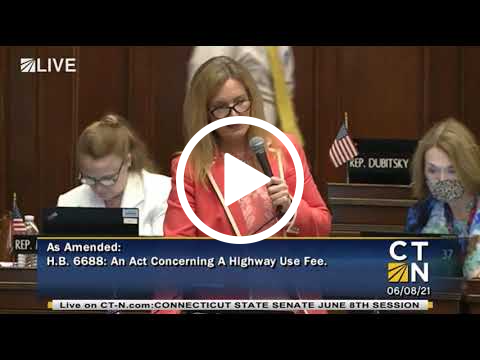 While this year's biennium budget passed with bipartisan support, I was unable to vote yes on it. The budget is being praised as a "no new tax increase" budget but unfortunately, this is not the case. The budget includes fee increases, for one, but also relies on revenues from bills passed outside the budget like the outrageous Highway Use Tax, which was voted on separately. Furthermore, this budget grows government unnecessarily by creating new but redundant offices in the Department of Public Health, costing over $1.5m in this biennium alone.

﻿Finally, it is important to note that the budget in front of us was crafted under special circumstances. The federal aid we have received because of COVID-19 will not last forever. When we sit down and create the next biennium budget, we won't have these funds to fall back on. Essentially, it will create a massive cliff of needed revenue to support their expansion of programs today. It may not seem like we are increasing spending now, because our Rainy Day Fund is at historic levels and municipal aid has gone up, but we are. I continue to be proud of our efforts to grow the Rainy Day Fund due to policies enacted in 2017, but unfortunately these spending increases may lead to increased taxes in 2023.

Next week, after we debate the budget implementer bill, I will have more information to share with you. For now, can read more about the budget here.

Please reach out to me if you have any questions about these bills or anything that happened during the legislative session. I hope to hear from you.